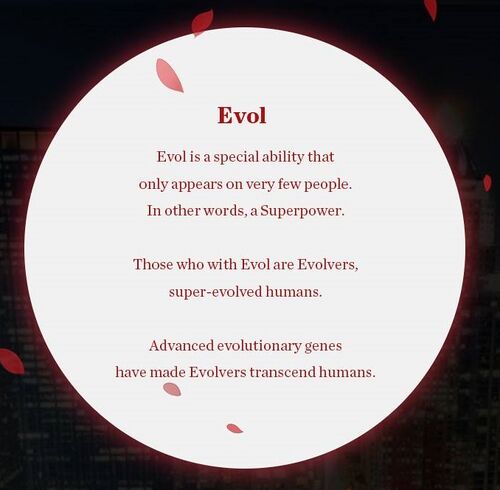 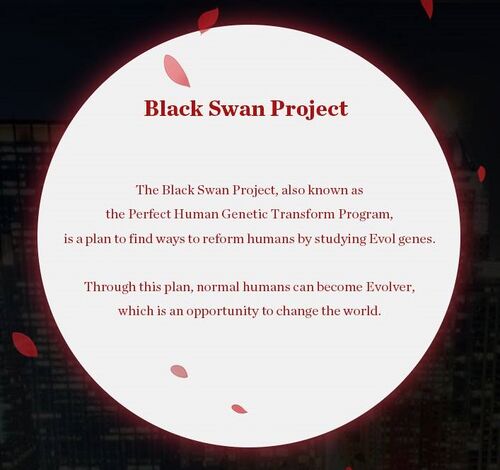 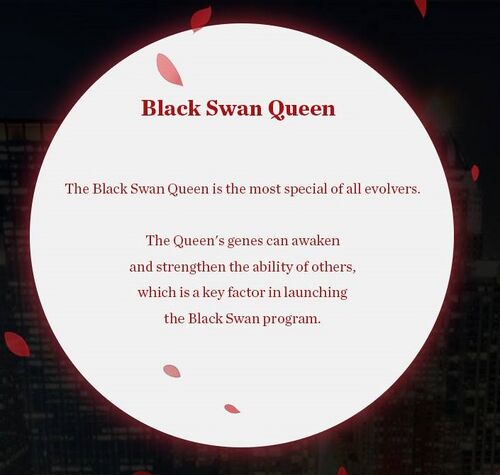 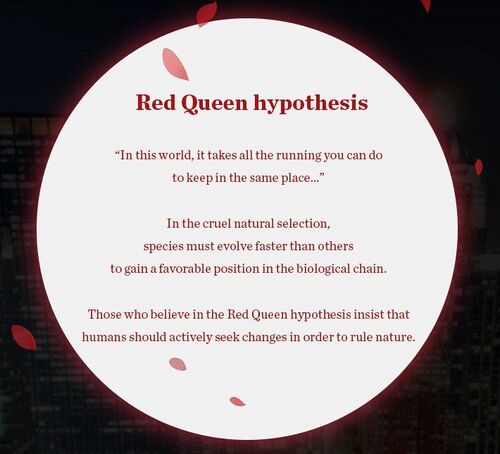 "I hereby make a vow to my country and my people: I will do my best to serve, with all my life and passion, I will be fearless and selfless, I shall never betray the values I hold, That every bullet from my gun will only be fired for justice."

The STF is a special institution that deals with Evol crimes, monitors and regulates Evolvers. It is independent of the military and the government, and is not subordinate to either party. It is distributed in various locations, with its core operations department in Loveland City. The Commander is Leto.

Its main mission is to investigate Evol crimes and arrest criminals with Evol. It has its own military equipment unknown to ordinary people. Every agent in the STF has an Evol and another social identity as a disguise. They are an extremely powerful force.

Seventeen years ago, the orphanage incident was exposed. As the main force to destroy the Black Swan laboratory base, STF became directly involved in investigating the B.S. Organisation.

In the midst of continuous monitoring and investigation, the STF gradually obtained some information on the B.S. Organisation.

Two years ago, when the B.S. Organisation made a comeback in Loveland City, Leto started planning new operations as well, in the capacity of the leader of STF.

Operations Department: The core component of the STF which is responsible for investigating Evol crimes and arresting criminals who have Evol. It is mainly divided into two teams, led by Eli and Gavin respectively. Each team comprises of an independent and comprehensive combat organisation, and are responsible for different types of missions.

Logistics Department: It is divided into the investigations department, information department, research department, medical department and other departments to provide the teams with the greatest degree of backup support. The most comprehensive Evolver archive is found here, and legalised research experiments targeted at Evol are also conducted here.

Special Operations Team: The mysterious team directly under Commander Leto’s command is not part of the task force. They follow Leto's commands solely and usually only appear in major Evol cases.

"We hail from the future, and only strive for the evolution of mankind. We possess Evol, and we are the creators of everything. No one can stop us, and we are the true masters of the world. QUEEN is about to awaken. Look forward to us walking side by side as we advance in the new world."

BLACK SWAN is also referred to as the B.S. Organisation. On the outside, it claims to be a genetic research institution. It was originally a secret underground research institute established by a group of scientists and businessmen. After rapid development and reorganisation, it became a large and secret multinational organisation.

At present, members are distributed all over the world with different social identities. But all of them are successful people with a certain influence in society.

In order to implement the BLACK SWAN Project, the organisation has carried out various illegal private human experiments over the past twenty years. These include the stimulation, transplantation, and reconstruction of Evol genes, attempting to transform ordinary people without Evol into Evolvers, creating an opportunity to step into a “New World”.

Seventeen years ago, the B.S. Organisation moved abroad after an illegal experiment was disclosed. Although it disappeared on the surface, it never gave up the BLACK SWAN Project. The Special Task Force has spent years investigating the organisation. But due to its strong anti-reconnaissance capabilities and the huge forces behind it, it has been unable to find strong evidence.

"When all parallel times and worlds are made one, we will look from on high, and pull back the curtain. And then what causality and truth will you see?"

Having been an experiment subject since he was little, Kiro has always stood in the dark, but he has always struggled and held firm. His willingness to undergo the Evol modification experiment was in order to protect "you", but also to complete the mission he has always clung to. Kiro has always been pursuing the whereabouts of his master Key, and in the behind-the-scenes chapter for Chapter 14, he finds a message left by his master, meanwhile also accepting the mission of the Key and opening that door for the first time. This mission will be revealed to everyone in future chapters.

After Kiro says goodbye on the roof of the TV Tower, he is put into a secret room by Black Swan as punishment and then summoned by a mystery person in the Black Cabin. In an unobservable higher-dimension, unknown things occur. After Kiro emerges from the Black Cabin, he is transformed into a completely different person: A founding god of Black Swan — Helios. Helios also appeared in the White House explosion incident of 1908. Helios of that time and Helios now have the exact same appearance, which all has to do with what happened in the Black Cabin.

Path of Faith: From STF to NW

Gavin’s Evol became awakened the moment he fell from the rooftop at high school upon hearing your piano playing. It’s also why he was forced to leave school and undergo training. After graduating from the police academy, Gavin formally enlisted in the Special Task Force. Later after his faith was shattered, in order to obtain greater strength with which to protect the Producer, he accepted his father’s conditions and carried out the NW Plan, receiving a new Evol through this experimental modification. Gavin has been through many hardships, and in Chapter 6 he found out the reason why the Producer became awakened at the start of the story — all part of Black Swan’s design. This simmering grudge between Gavin and Black Swan will unfold for everyone piece by piece in a future plot to come.

In the first segment of Behind the Curtain, Gavin is investigating a bullet. The bullet’s construction is special, but not lethal. Inside, they detect remnants of a special potion whose specific components are unknown. Inside the bullet is an extremely small, particular mark — the “S” symbol with an upturned tail representative of Black Swan. An as-yet-unknown material in the metal composing the bullet is also discovered, and it could not have been created using current technologies. This bullet reveals the existence of parallel timelines. And this piece of evidence makes Gavin more steadfast in his heart — to find the truth and protect you.

Identity Shrouded in a Fog

From the special guest professor that helped you complete shows, to your next-door neighbor; from the impenetrable mystery of Ares, to that figure looking at you through the mirror... Lucien’s identity always seems to be changing. That pen that he gifted you was a witness to the severing of ties before the TV tower. Have you ever considered whether the revelation of Ares identity was chance or necessity? And why would he make this choice? As the plot develops, what new roles will Lucien take on?

Variations of a Plan

Victor possesses the ability to manipulate time. A mysterious old man and your father’s old friend, Grandpa Chuck, once gave Victor a special sundial watch, which is of particular benefit to Victor’s ability. Do you still remember that glazed glass cup? I’m sure you would never forget how he was that morning, curled up in a cramped little attic. "Kids, as long as you’ve got time, everything can still change. Time is the future." In Chapter 18 of the main story, Victor once told you that he saw you in the future eating and drinking at Souvenir. At the time, you thought this was a lie. But have you ever considered that maybe the future really will be like this? Did the Victor that you saw in the Black Cabin with the black vortex swirling around his hand ever make you think that there was something different about him? At what time and what place will this Victor make an appearance?

While acting as the commander of the STF, Leto has actually always hoped to open a gate into the higher dimension. Did you ever notice that in the Jay and Josie incident, the story revealed that the STF became aware of the existence of other dimensions and hid this secret? This was really because Leto wanted to be in sole possession of a door to the parallel timelines. Afterward, Leto discovered that Victor possesses the ability to control time and determines that this is an ability capable of “dimension-breaking” if evolved, and so he keeps Victor in his sights. And he never gives up trying to partner with Victor.

The mysterious Time Observer often appears on the scene of important incidents. Aside from “you” and Victor, virtually no one knows of this existence. In Behind the Curtain, the Time Observer seems to be paying close attention to Victor throughout. Have you thought about the reason behind this?

Behind the Curtain Connection[ ]

Retrieved from "https://mrlove.wiki/w/index.php?title=Lore&oldid=26728"
Cookies help us deliver our services. By using our services, you agree to our use of cookies.